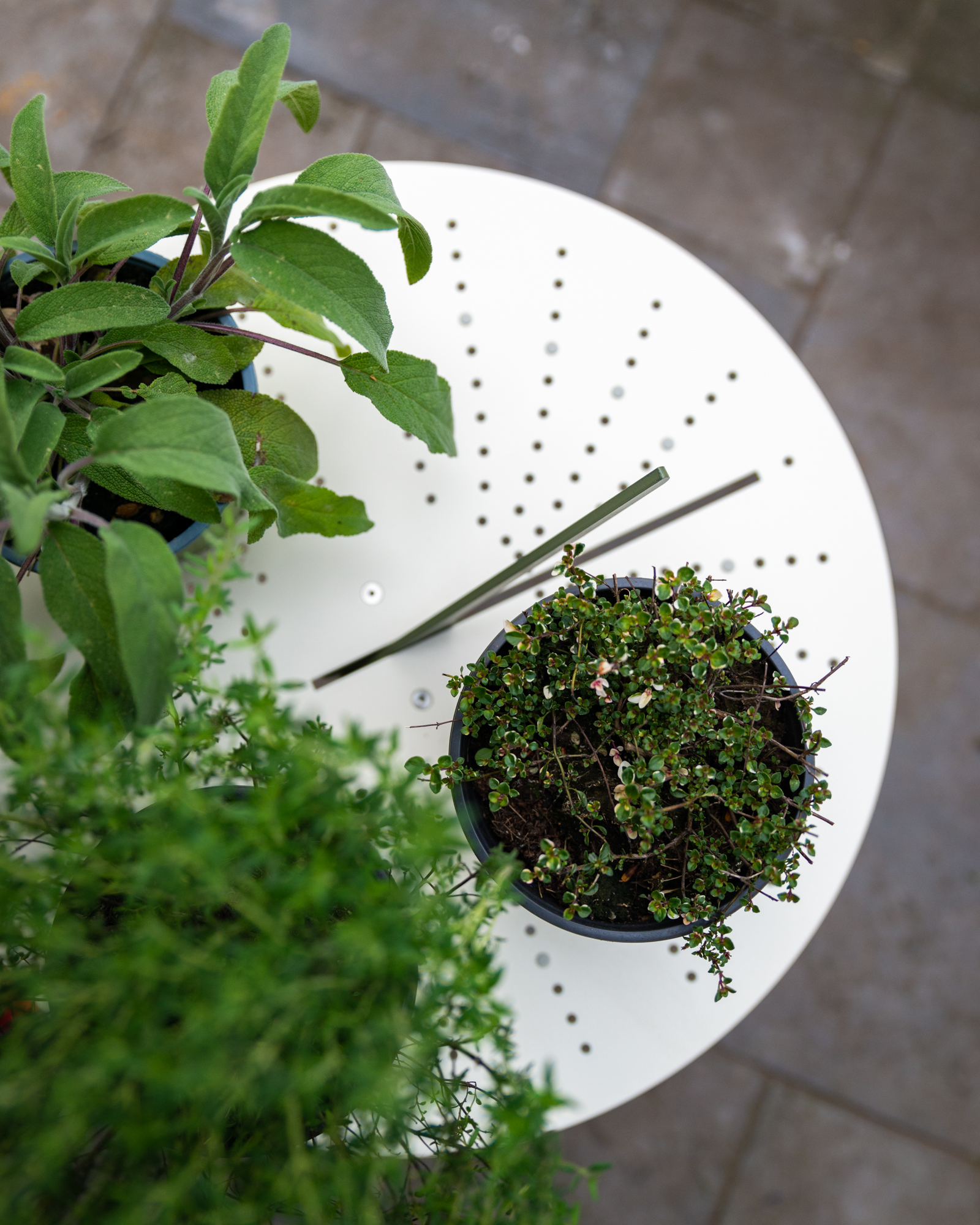 The Sundial Table: how does a sundial table actually work?

Thanks to the Sundial Table, a design by Umut Yamac, you can relate to time in a different way. Instead of your phone or your watch, the position of the sun and its shadow tells you what time it is. But how does a sundial work? And how is it possible that you can use the Sundial Table anywhere in the world?
Man has always been busy measuring and registering time. By studying the sun, the moon and the stars, people used to determine what time of day it was and what time of year they lived. This was, for example, useful for agriculture, to be able to sow and harvest at the right time. Later, in the time of the ancient Greeks and Romans, tools were invented to measure time. One of these tools was the sundial.
The shadow as a timekeeper
Contrary to what many people think, it is not the sun that indicates time, but it is the shadow. Because the Earth rotates on its axis, the shadow of an object changes constantly. When the shadow points to the north and the sun is at its highest position during the day, it is exactly 12 o'clock. The sun is then exactly above the meridian at the highest position of the day. For this reason, the tip of a sundial should face north. From there, the time lines on the plate can be arranged so that the shadow indicates the time.
Every city has its own mini time zone
Note: sundials usually indicate true local or solar time and not clock time. There are three reasons for this. First: the mini time zones. Long ago, everyone read the time by means of sundials and each town and village had its own mini time zone. So when the sun was at its highest, it was 12 o'clock: that was the rule. But this created (minute) time differences between the various villages, because when the sun was at its highest in Amersfoort, it still took 4 minutes to reach Amsterdam. Due to the need for faster communication and growing trade between the different areas, it was necessary in the 19th century to make agreements on a central time (CET). Larger areas were all given the same time (time zones). Because of this, sundials are no longer correct: Amsterdam is, as said, 4 minutes ahead of Amersfoort.
No summer or winter time
This is only a small difference. But the measuring point of our time zone GMT+1 (Netherlands) is on the border between Germany and Poland. So when the sun is at its highest on that border, it will take another 45 minutes before it is, for example, in Amersfoort. In short: we are 45 minutes behind our time zone or 15 minutes ahead of England (where we fit in better).
A second reason why the sundial and the clock time differ: the sun itself, of course, makes no distinction between summer and winter time. The sun only indicates the solar hour. Therefore, there is a one hour time difference on the sundial during the summer time period.
Finally, the length of the day also varies throughout the year, resulting in a maximum difference of 15 minutes. This is due to the inclined position of the earth and the elliptical plane in which we revolve around the sun. If you want to read the exact time from a sundial, you have to take these three things into account.
Make time personal with the Sundial Table
Weltevree's Sundial Table combines a functional object, a table, with a sundial. Because you can set it yourself, this universal sundial works anywhere in the world. How to set it?
1. Find the latitude of your location and set the dial.
2. Then mark the relevant ring (depending on the latitude of where you are) with the pins and point the pointer to the south.
3. That's it!
Besides reading the time with the Sundial Table (with the grey pins), you can also personalise this sundial by marking the moments that are important to you (with the yellow pins). When the shadow hits a certain pin, it could mean it is time for a coffee break or a playtime with the children. The pins are designed in such a way that they can be pulled in and out in no time at all. Easy does it!
Do you want to learn how to read the time accurately on a sundial table? Read the how-to here.
Also functional when it is cloudy
With the Sundial Table, designer Umut Yamac wanted to deliver a design piece that interacts with its environment. And the outdoor table or sundial certainly does that: it is activated by the sun. This makes it a less static object. This is what Yamac finds interesting. And what if it is cloudy and the sun does not show itself very often - as we are used to in the Netherlands? Then the sundial goes into sleep mode and you can use the Sundial Table as a handy outdoor table. As far as Yamac is concerned, the Sundial Table does not focus on 'timekeeping' anyway; after all, we now have our phones and watches for that. He hopes that this special object will give you the chance to connect with moments that are important or meaningful to you. And that it inspires you to live more in the moment. Sounds good, right?
Would you like to read more about the Sundial Table and the thought process of designer Umut Yamac behind this special object? Be sure to read the interview we had with him.
Photos: Casper Boot / Tuinbroekies 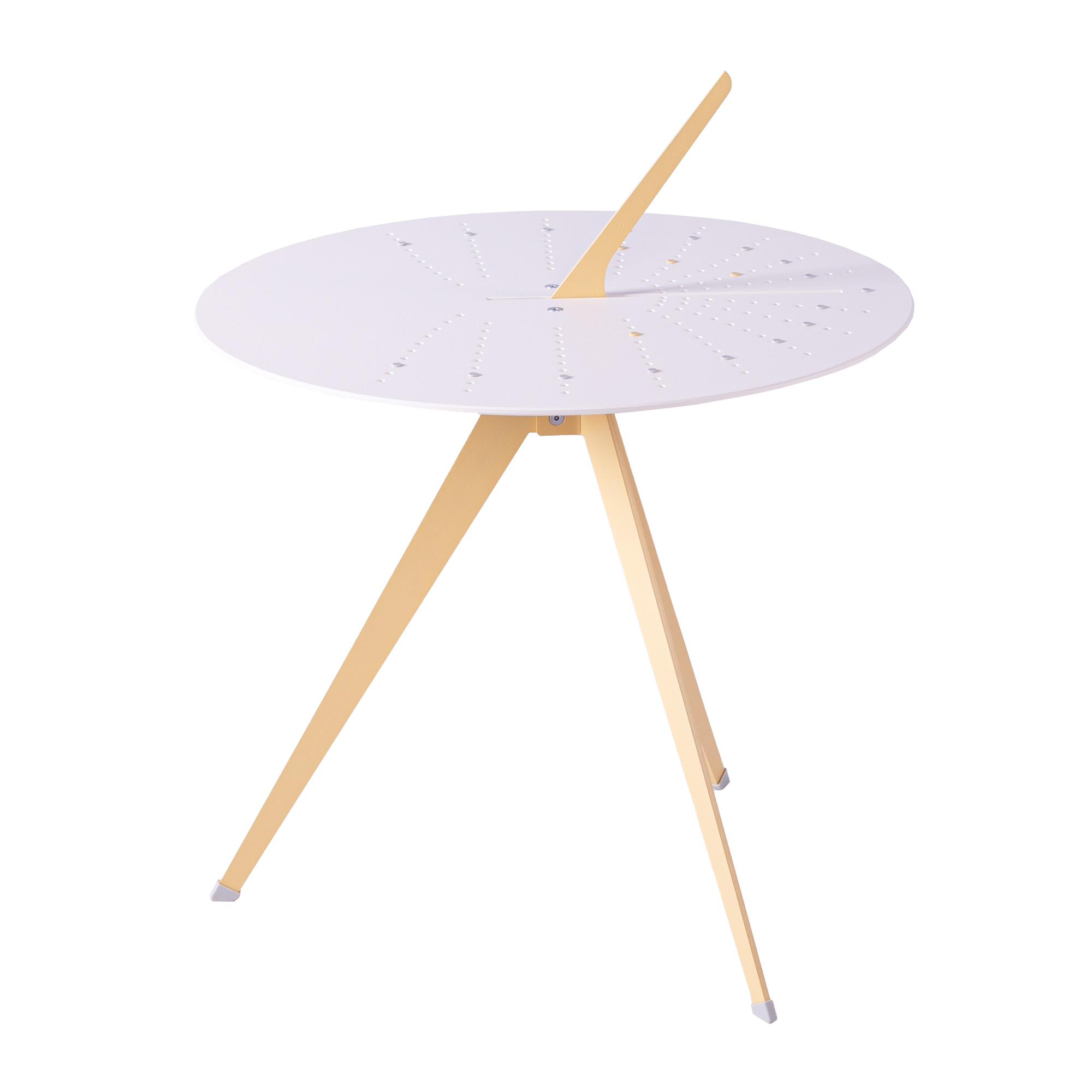 SUNDIAL TABLE
Experience time in a way that is meaningful to you with the Weltevree Sundial Table. This unique combination between a coffee table and a sundial comes to life through sunlight. The Universal Sundial works anywhere in the world and connects the coffee table to the outdoors and the sun. Designed by Umut Yamac, the Sundial Table exists in RAL 1002 and RAL 6013, with a RAL 1013 table top.  Personalize the table and use the included pins to pin the moments that are important to you. For example, pin your coffee and lunch breaks or the time your partner comes home from work. Because the position of the shadow tells you what time it is, you live less by the time and more in the moment. These moments are in agreement with your natural rhythm: the rhythm of the sun.  Find out more about how the Sundial Table works in this story.
US$343.00
This website uses cookies to ensure the best experience possible. More information...